Tattooing has been practiced across the globe since at least Neolithic times, as evidenced by mummified preserved skin, ancient art, and the archaeological record. Both ancient art and archaeological finds of possible tattoo tools suggest tattooing was practiced by the Upper Paleolithic period in Europe. However, direct evidence for tattooing on mummified human skin extends only to the 4th millennium BC. The oldest discovery of tattooed human skin to date is found on the body of Ötzi the Iceman, dating to between 3370 and 3100 BC. These include Amunet, Priestess of the Goddess Hathor from ancient Egypt (ca. 2134–1991 BC), multiple mummies from Siberia including the Pazyryk culture of Russia, and from several cultures throughout pre-Columbian South America.

The earliest possible evidence for tattooing in Europe appears on ancient art from the Upper Paleolithic period as incised designs on the bodies of humanoid figurines. The Löwenmensch figurine from the Aurignacian culture dates to approximately 40,000 years ago and features a series of parallel lines on its left shoulder. The ivory Venus of Hohle Fels, which dates to between 35,000 and 40,000 years ago also exhibits incised lines down both arms, as well as across the torso and chest. 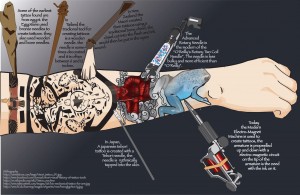